Preface of the Brazilian edition

There are all sorts of symmetrical symbolic compositions in the place where René is now standing, and in the reception speech is about to give. It is customary that a newly-elected member would eulogize his predecessor in his installation ceremony, in this case father Ambroise-Marie Carré, a Dominican priest, “un des deux seuls membres du clergé régulier jamais élus à l’Académie.” As a thinker who expressed the controversial and thought provoking idea that Christianity is the main engine of secularization, Girard will give a formal talk on the intellectual and spiritual career of a priest in a former Catholic chapel, which was turned into the secular venue after the French revolution, as the symbolic centre of the new religion of European modernity: the language and culture of the national state. It is as if history is now trying to recompose its chiasmic movement, by which, according to Girard, Western culture is becoming more and more Christian when it tries to distance itself the most from Christianity. Ambroise-Marie Carré was indeed a voice within the Church who witnessed the difficult transition that occurred with the Second Vatican Council, and with the quest for a modernization within the Church that was not without tensions, hesitations and contradictions. Girard, however, is not so much interested in Father Carré as a public or political figure, as a famous orator and a media person, or as one of the key figures of the French resistance against the Nazi occupation. Quite the contrary. He opts to zoom in on a very private, but very decisive moment in Carré’s life: the experience of the mystical encounter with God when he was thirteen, as narrated in one of his diaries, a moment which tinted his fervent public activity, his passionate oratory, his writing and his actions throughout his life. It is quite striking, I think in that moment, the way in which René, in this very public and solemn occasion, decides to speak of a very personal, albeit pivotal, moment in Carré’s life. It is as if Girard is also commenting on a similar event which marked his life: his own conversion, as he recounts in a long interview with the French journalist Michel Treguer, published in 1996, Quand ces choses commenceront. He is maybe telling the audience, that everything he did, everything he wrote and thought, in the past 50 years, stems from that, from his personal encounter with God. His first book, Mensonge romantique et verité romanesque, composed in those crucial years, is already a departure from the “lies” of romantic individualism towards the “truth” of revelation and conversion. As typical of René, his voice is sombre, with a modest tone, even when speaking of a lively personality like Carré’s. The applause at the end of René’s speech is nonetheless warm and generous, since he touched an emotional chord in many of the audience, including those “immortels” who were personal acquaintences or friends with Father Carré. A completely different tone of voice then resounds under the Dome of the Institute de France, when Michel Serres takes the podium for his ‘Réponse’ to René’s speech. For me, again, is like going back ten years when I met both at Stanford attending their lectures and had been impressed by their different intellectual and teaching styles. I was much taken, at first, by the flamboyant, passionate, stylish rhetoric of Serres, with his beautiful, sophisticated, highly literary French, with which he was able to weave, in fascinating intellectual tours de force, the history of science, philosophy, literary discourse, sociology, and anthropology. However, as I began to notice, many of those fascinating intuitions, many of the extraordinary remarks Serres made in his lectures and seminars, were glosses to the immensily powerful intuition that René had few decades before when he wrote La violence et le sacré: the sacrificial origins of culture. And indeed, it is once again what Serres is talking about now, when he remarks that the “Coupole”, the Dome underneath which we are all seating in silence, is the architectural vestige of the stones of the sacrificial lapidation, “modèle réduit” of the Egyptian pyramid. It’s a tragic anthropology that is described by René in his ouevre, but it fits human history like a glove. That’s why Serres calls Girard “the Darwin of human science”, because he disclosed the engine of our civilizations, founded on the sacrifice of innocent victims. He calls René his “twin” because of their long-standing friendship, their common origins in the south of France, but mainly because of their biographical commonality at the base of their ways of thinking of history in tragic terms: the devastation of Europe under the siege of fanatical totalitarianisms they witnessed when they were teenagers, and that convinced René to leave France in 1947 and migrate to the USA. Girard’s theory can be seen as the tragic autobiography of Europe and its nationalisms in the first half of the 20th century, which scapegoated millions of innocent people on the altar of collective historical resentment and of military, political and ideological domination: “Nous partageâmes une enfance de guerre, une adolescence de guerre, une jeunesse de guerre. Les émotions profondes propres à notre génération nous donnèrent un corps de violence et de mort. Vos pages émanent de vos os, vos idées de votre sang ; chez vous la théorie jaillit de la chair.” But against this tragic background, Serres remembers the “vraie nouvelle”, moments that become turning points in human history: the first one comes from Abraham, when he was stopped by God’s angel before sacrificing Isaac, his only son; the second, the Passion of Christ which reveals the innocence of the victim, the horror of all sacrifice; the third comes from Girard himself, who once more disclosed the mechanisms of all this to our sceptical modern eyes, so as to inscribe him in the long history of the revelation and the anti-sacrificial narrative of the Biblical texts.

The ceremony ends with a very long applause, while people make their way to the quai outside, for a moment of fresh air, before walking rapidly to a large salon in the west wing of the Institut de France, where drinks are served. Other familiar faces pop up: Paul Dumouchel, Maria Stella Barberi and Bob Hammerton-Kelly who, quite disgruntled, just got there, missing the whole ceremony, because of a late plane. We all catch up on present and future projects, on the next conference or book. One by one, we manage to squeeze in through the crowd to hug Martha, who is very happy and cheerful, above all to have her whole family there, for such an occasion. We greet René too quickly though: too many faces surround him and he seems a bit overwhelmed by the whole event but nonetheless has a smile and a good word for everybody. We finish our glasses then and take our thoughts on René and on mimetic theory with us for the night. Despite the powerful and majestic sight of the Seine, the façade of the Institut de France fully lit up in the cold Parisian air, and the whole pomp we are leaving behind, for many of us, it seems to me, this was all very personal. 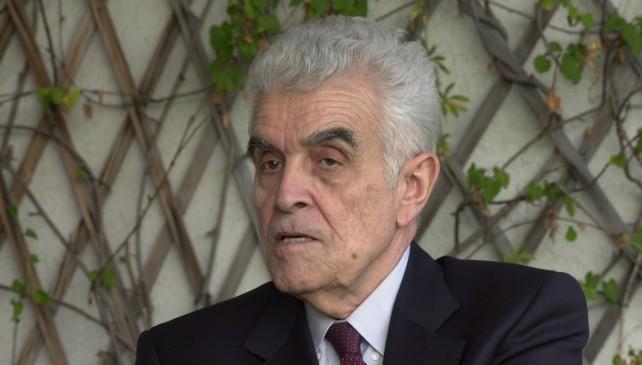 If we continue to keep this space alive it is thanks to you. Even a single euro means a lot to us. Come back soon and SUPPORT DOPPIOZERO
Personalities
08 November 2015
Personalities