"I like looking at roots even when I don’t see their origin."

There are works that arrive with a bang, loudly announcing their presence as if demanding to be looked at. There are others, however, that breathe in the space and patiently await the arrival of their observer, cultivating a secret life that happens before and after meeting the spectator. Luisa Rabbia's works belong to the latter: they call for a more gentle-mannered approach, reaching out to those who decide to connect with them and paving the way to a world of silent vastness.

While originally from Pinerolo, Luisa Rabbia has been living and working in New York for many years, which makes her new exhibition at the Collezione Maramotti a rare opportunity to closely observe her work. Love is a small yet fully-fleshed-out retrospective, featuring canvases, drawings and a large mural from different stages of the artist’s career. The earliest works on display are from 2009, blue shapes on white backgrounds depicting primordial organic beings and unidentified biomorphismes. These can be considered “gateway pieces”: works fundamental to understanding the transition between Rabbia’s earlier works and her most recent pieces. Driven by an obvious interest in surface, these later works are almost "epidermal" in nature; the need for controlled figuration is duly overcome, expanding the space for representation and offering a sort of pictorial meditation in which signs and colors become closely interdependent. 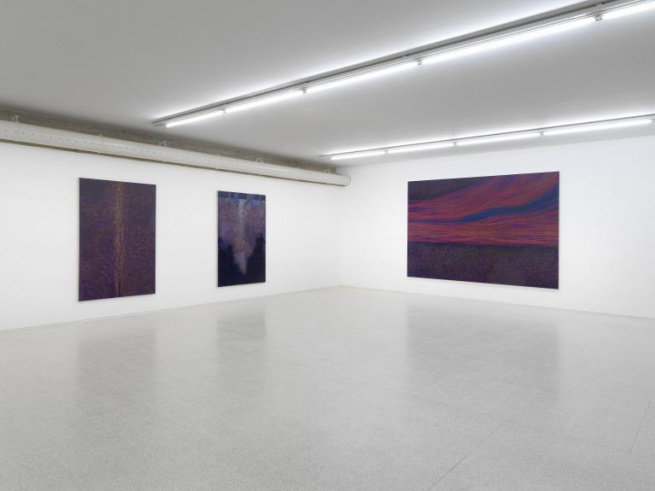 While she did experiment with varied artistic languages ranging from video to sculpture, Luisa Rabbia's preferred medium is drawing, with its scenic strength and direct relationship to gesture. Although drawing is conventionally identified as a conceptual discipline par excellence, in Rabbia’s work it is also a venue for tracing the body, favored for its expressive strength and rough specificity. It was precisely these virtues that made drawing the artist’s choice of primary language during her first experiences in the United States, where the situation called for a lighter medium, allowing for a wide range of expression without requiring a large space for production. Drawing, after all, asks for little more than a blue pen and a sheet of paper to create entire worlds.

In the very gestures of her drawings we find the core of Rabbia’s artistic practice, deeply rooted in the dialectic between inner and outer space. As put by the artist herself: "Drawing has always been my medium. I've always preferred the trace to the brush stroke”. However, while this relationship with the trace is evident in all the works on display, the graphic act here is not confined to the mark of the pencil; rather, it is activated, irradiating its energy towards painting. The tip of the pencil touching the surface of the paper and the flow of their interactions are a priori aspects of several of her creative manifestations. The movement towards the other, which is the foundation of Rabbia’s work, is an energy that reconnects her to the legacy of Arte Povera. An inner/outer exchange involving both the phenomenological and symbolic dimensions of the work’s space and the relationships between the artist and the world in an attempt to find a meeting point between the intimacy of the experience of self and the unknowable that resides in the other, culminating in the form of a lay communion with existence. The relationship between the empirical, tangible space of the canvas and the inner space of the representation also draws from the lessons of Agnes Martin, an artist beloved by Rabbia and whose presence can be keenly felt among her canvases. These two artists do not have what one could describe as a relationship of filiation or citation; it is rather one of neighboring worlds that resonate with each other, united by a will to cut their work to the bone in order to bring forth deep, universal and occasionally scandalous truths. 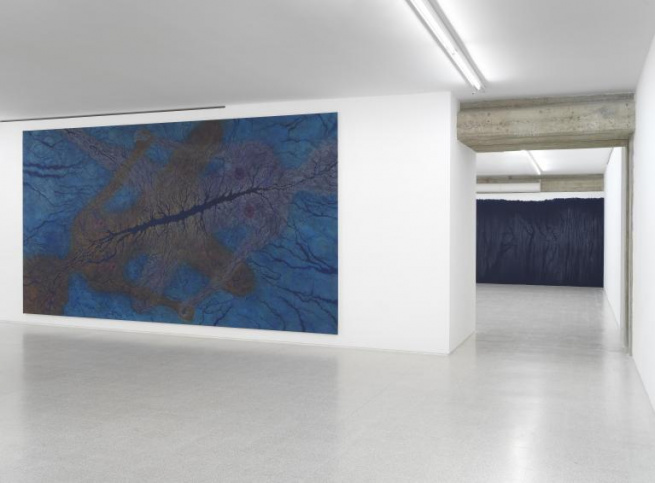 The 2009 works mark an approach to form with a clearly perceivable generative movement: while shapes are still closed, there is a clear sense of where the exploration of those dense subjects tends to take her; a crucial breakthrough in production foreshadowing what will come next. Until then, Rabbia’s work was clearly outlined, albeit through a plethora of means and solutions. It comprises a reflection on private and collective experience, on the body as a container of memories and on the dynamics of relationships between individuals, revealing the intrinsic fragility of the contemporary human - or rather post-human – condition.

Today, Luisa Rabbia’s drawings have changed, shifting direction towards painting, and given life to works that tend to abstraction and draw on a deep palette of myriad purples, blues, reds and browns; colors that vibrate in low frequencies and conjure the evocative power of Abstract Expressionism. A color transcendent and cleansed of the constraints of form, emerging from the canvas with what is almost a movement of self-determination: “Somehow I paint, but I paint using the traces of my body, my hands, and then the colors arrive with colored pencils. Before I begin to draw, all we have is a big blue surface”.

In Rabbia’s work, however, there is no lyrical dimension or drama. What is manifested is a camouflaged figuration, a network of traces that simultaneously suggest geographic maps, X-rays, cells, shrubs, venous webs, cartography, sky maps (Microcosmo, 2014). Her canvases offer spectators an opportunity for imaginative reading, where one can perceive wounds and karstic openings, rivers and ravines, visions ambiguously reminiscent of both geographical and medical atlases (Pathway, 2014, Untitled, 2013). Everything seems to be in dialogue: sex or a river, bacteria and minerals, roots, human and animal skin; rhizomes, mushrooms, lungs. Each element contributes to a network

of traces that, while seemingly random, in fact outline a plot crisscrossed by automatic writings of distant surrealist origin. The barrier between what is inside and what is outside vanishes; everything is addressed as a way to overcome the physical body, seen here as a limit to the external world. Here is profound nakedness, the antithesis of what philosopher Leonardo Caffo calls "a humanity built on the borders"(1), an exercise in revelation carried out through figuration that has the boldness not to resemble anything the contemporary market offers in the way of discourse about the present.

All the sons of Adam form one body

They are of the same essence.

When time afflicts with pain

A part of the body

If you do not feel the thought of others

you do not deserve to be called man.

This sort of ‘universal map of existence’ removes man from the center of the universe, instead inserting it into a complex system where everything exists in relation to other things but without exercising domain or hierarchy thereon. The artist is part of this dance, too. Unveiled, she offers the spectator the spoliation of her masks and the ritualistic exposure of her own life: "I am interested in finding the connections between an interior landscape, based on personal experience, and a collective landscape where you meet the Other, which is also a physical landscape - it is the environment." If the skin is a landscape and blue is an ideal color that represents a "universal breed", the distinguishing marks of I Want to Be There, Too (2015) are in the human multitude, the painful masses of migrants, but also in the testimony of every single individuality, the cellular unit. Millennia of human and environmental evolution, of stories told that add to other stories, of chemical reactions, causes and consequences that bind existence from the cosmos’ mysterious origins to the instant that has just passed. One after the other, the events attest to a shared experience that opens up to real possibilities of empathy among individuals and towards the world. All of us are those distinguishing marks, beings waiting under a river of bloodlines dating back to the beginning of time and art to Munch and forward, into tomorrow. Because, as we now know, time does not run smoothly, and art is proof of it. 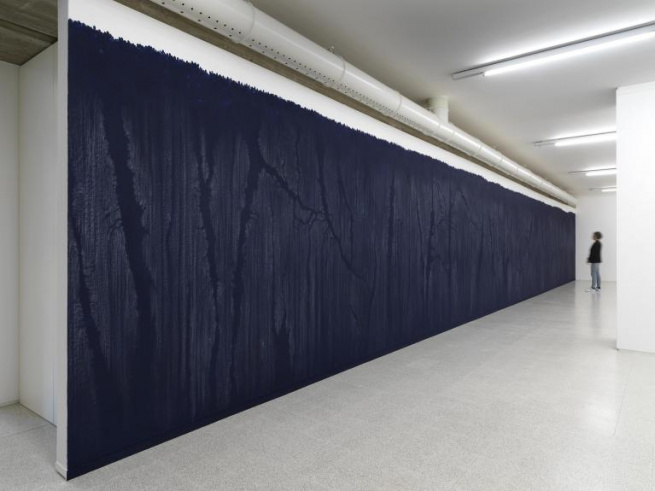 "I can never find in other colors that depth, that mystery that blue gathers. That silence."

A blue veil pervades the works, giving the images a form of rarefaction, subtracting corporeality from the figures. In the site-specific mural Another Country (2017), blue throbs beneath the thin white pastel texture that runs along the entire surface, emerging almost like frottage. Granted the time to observe the work in silence for a long time, one happens to resonate with it. If it had a sound, it would be the continuous chord of an Indian shruti box, a harmonium-type instrument that accompanies mantra songs. It is not a question of summoning an explicit spiritual scenario, but rather that of catching that breath - an Aleph, perhaps - the respiration perceived in the canvases, allowed to rise by the vibration of color. That breath is perceived through the organs of NorthEastSouthWest (2014) and Everyone (2013), the "celestial bodies" embedded in Love's (2016) intercourse that Mario Diacono, in the catalogue’s critique, interprets in the light of Jewish mysticism by highlighting an underlying bond with Sephiroth, the Tree of Life, turned upside down, roots stretching into the air.

In a historical horizon marked by shattering, the experience brought about by Luisa Rabbia's work is a form of peripheral vision. Not one center but a multitude of centers; not one identity, but all of them. The re-appropriation of a deep sense of kinship, not limited to the small size of a family clan but rather extended to the understanding of every part of the reality in which we are immersed, is a powerful social hypothesis for our present, a thesis that openly challenges the fears that compete to define the spirit of our time.

Having definitively overcome the boundaries of form imposed by sculpture (the protagonist of the first season of the artist's work), Rabbia has today arrived - thanks to drawing - on the shores of a new figurative territory eager to be fully explored. A land of endless spaces, a continent whose geographic coordinates reside in the heart of man. 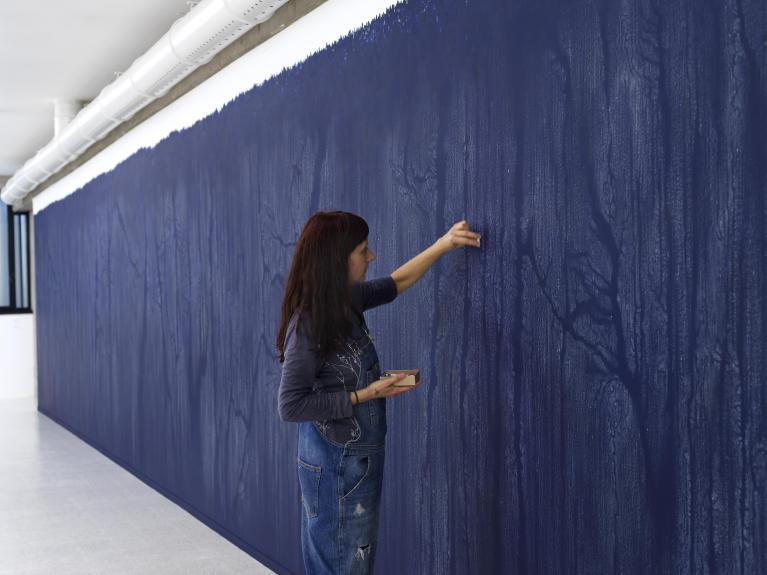 If we continue to keep this space alive it is thanks to you. Even a single euro means a lot to us. Come back soon and SUPPORT DOPPIOZERO
08 December 2017