The incurable nature of the offense

They could be two different images. The backdrop of one is prevalently yellow ochre, with three soldiers in full battle gear clambering diagonally up the steep, sandy incline.  In the other, a composite crowd of children, adolescents, men, and women wave their flags against a predominantly green, grassy background. Separating the two is a barbed wire fence. The photograph was taken Friday March 30 in Gaza, when 16 Palestinian demonstrators were killed and 1,400 wounded. On Saturday there were two more deaths, and the tally of the wounded is not known. A crowd of 30,000 had gathered along the fence that separates Gaza from the State of Israel. They threw stones and rudimentary incendiary devices against the border fence, where over 100 select Israeli Army snipers had been positioned. The Israeli Minister of Defense, Avigdor Lieberman, stated that orders were orders, and that if any of the demonstrators approached the fence, his soldiers had been given orders to fire. The inhabitants of the Gaza strip, many of whom are followers of Hamas, have lived segregated lives for years. The living conditions in the territory have been reported by journalists and writers, but it is hard to chronicle their desperation, which beggars belief. This picture does not tell the whole story; what it does is compare and contrast the more or less peaceful crowd of demonstrators with those three soldiers who are armed to the hilt.

The great Israeli writer, Abraham Yehoshua, who has always been critical of the right-wing government in power since 2009, condemned the demonstration as having been orchestrated by Hamas: “We have left Gaza, we lost it in 2005, so what more do they want from us?” he reportedly said to the journalist Antonello Guerrera on the telephone (La Repubblica, April 1). The Palestinian writer, Suad Amiry, who lives in Ramallah, does not agree. She told Guerrera in an interview that the demonstration was almost certainly bottom-up and fueled by the inhabitants. In her view Hamas had little to do with it. The only thing that is certain is that the population of Gaza is desperate. They have lost support, even from once sympathetic bordering Arab countries such as Saudi Arabia and Egypt. Amiry believes the demonstration was an attempt to attract the attention of the international community towards a stateless people who have lost nearly all their land. The inhabitants of Gaza want to remind the world that nobody talks about the Palestinians any more, whereas there has been mobilization around other refugees from other wars, not least the Syrians who have been fleeing their war for eight long years.

It is not our intention to analyze a decades-long, and incredibly complex, problem for which an acceptable solution has never been found. It is evident, however, that this episode cannot pass us by without establishing what actually happened along that barbed wire fence in Gaza. UN Secretary General. Antonio Guterres, and the EU High Representative for Foreign Affairs and Security Policy. Federica Mogherini, have both called for an official inquiry into Friday and Saturday’s deaths and injuries. Lieberman, for his part, has denied there will be “any such thing”.

We do not know whether Avigdor Lieberman - born in Moldavia in 1958, and founder of the right-wing party, Israel Beytenu - has ever read Primo Levi in any of the four languages he speaks. In a passage from The Truce, the writer reflects on the perverting power of offense and what happens to humans who receive it. This is what he wrote remembering his feelings on the liberation of Auschwitz on January 27, 1945: “So for us even the hour of freedom struck solemn and oppressive, and filled our hearts with both joy and a painful sense of shame, because of which we would have liked to wash from our consciences and our memories the monstrosity that lay there; and with anguish, because we felt that this could not happen, that nothing could ever happen that was good and pure enough to wipe out our past, and that the marks of the offense would remain in us forever, and in the memories of those who were present, and in the places where it happened, and in the stories that we would make of it. Since—and this is the tremendous privilege of our generation and of my people—no one could ever grasp better than us the incurable nature of the offense, which spreads like an infection. It is foolish to think that it can be abolished by human justice. It is an inexhaustible source of evil: it breaks the body and soul of those who are drowned, extinguishes them and makes them abject; rises again as infamy in the oppressors, is perpetuated as hatred in the survivors, and springs up in a thousand ways, against the very will of all, as a thirst for revenge, as moral breakdown, as negation, as weariness, as resignation.” The Israeli-Palestinian conflict has accumulated an infinite number of offenses. The most recent – although terribly serious, with 18 dead and 1,400 wounded -  we fear will not be the last.

The deaths and the injuries are not what we would encourage those who currently govern Israel – a country we sincerely love - to think about. What is more important is the “incurable nature if the offense” that Levi described in those last few lines, which “breaks the body and soul of those who are drowned, extinguishes them and makes them abject; rises again as infamy in the oppressors, is perpetuated as hatred in the survivors, and springs up in a thousand ways, against the very will of all, as a thirst for revenge, as moral breakdown, as negation, as weariness, as resignation.”

Nobody is excluded from this “mark of offense”: neither the drowned, nor the oppressors, not even the survivors. It “springs up in a thousand ways”, it is “against the very will of all”, and it produces “thirst for revenge”, “moral breakdown”, “negation”, “weariness”, and “resignation”. Only when those who govern Israel realize “the monstrosity” that they have perpetrated, and continue to perpetrate, might something change. ‘Might’ being the operative word. We are not convinced. As Primo Levi did in 1982 after the massacre in the Sabra and Chatila camps, the world needs to demand that these Israeli ministers account for their actions. Not the soldiers clambering up the sandy ditch towards the fence – or not just them at least – but those who command them. Those who do not appear to feel the smallest qualm or the slightest shame for what took place. Will the Israeli people raise their voices against those who govern them for this new massacre? 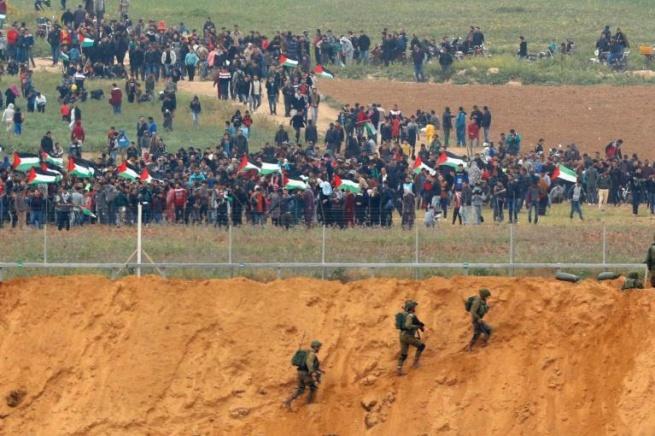