It is almost impossible for the contemporary philosopher to avoid coming up against Van Gogh’s Shoes. At least that’s how it has been since the “philosopher” par excellence of the Twentieth Century, Martin Heidegger, held them up as an exemplification of the nature [Wesen] of art, giving rise to a debate that still rages to this day. Despite this, in Heidegger’s favourite version of the Shoes, Mariella Guzzoni has in fact detected the presence of a small detail that had heretofore gone unmentioned and unanalysed. The reason for this oversight may be that, as she writes, “the frontality of the Shoes monopolises the attention of the observer, and so this fascinating detail has remained unnoticed for more than a century…” In the guise of a shoelace, in the lower right of the canvas, there is a kind of rounded root. Such a lace can no longer tie any shoe. Perhaps, Guzzoni adds, it does not even represent anything at all; it is simply the importation onto the canvas of something like oriental writing …

Mariella Guzzoni’s discovery (first published in her book Van Gogh. L’infinito specchio, 2014, and presented at the exhibition Van Gogh: my Japan, at the Sormani Library in Milan, 2017) is not of little consequence. Indeed, it reshuffles the cards not only on the Heideggerian interpretation, but also more broadly speaking on the Western canon’s reading of the artwork in the twentieth century. Whether they agree or disagree with Heidegger’s view on the Shoes, the Twentieth Century philosophers shared a single paradigm, varying in their approaches on how to apply it: a work is an authentic artwork if what it sets-to-work is Truth. Even post-modernism, with its apologia of signifiers, is no exception: the “power of the false” is none other than flipside of Truth that every authentic artwork sets-to-work. The pact between Art and Truth is unbreakable, even when Art ironically professes untruth or parodies what is true. 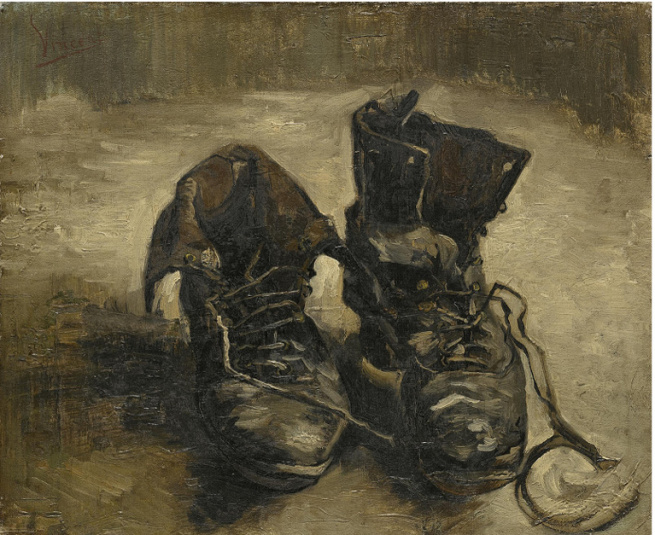 I write Truth with a capital T, because the Truth in question is not merely the trueness of a proposition or an image (the proposition in fact functions as the image of something) that is measured in its adequateness in relation to the object represented, or lack thereof. Twentieth Century philosophy has shown a sort of aristocratic scorn for this “vulgar” concept of Truth as mere “correspondence”. For the past two hundred years at least, nothing has been less welcome in the salons of aesthetics and of the theory of art than this ingenuous mimetic naturalism. The Truth set-to-work by an artwork is instead the state of possibility of every being-true in the sense of correspondence. Heidegger is very clear on this: Van Gogh’s Shoes are not a pair of shoes. They are neither a pair of shoes (a “particular”) nor the pair of shoes, meaning the idea or the nature of shoes (a “universal”). Rather, those shoes are the “there is” of the pair shoes and of the peasant that wore them, just as they are the world of toil and fatal resignation to the weariness that the peasant has experienced, as their worn condition testifies. The shoes are the (singular) event of a world, its “historicizing”, its “happening”. Van Gogh’s shoes are the appearance of Sense into which every historical existence is “thrown”.

Philosophers have the good fortune of benefiting from a conceptual shorthand that allows them to compress extraordinarily complex questions very efficiently. In fact, they are able to write that Van Gogh’s shoes are neither an “entity” nor the portrayal of an “entity” (a particular) nor the idea of an entity (a universal); Van Gogh’s shoes are instead the “being” of the “entity” (the singular). Of that determined entity (the shoes in this case), they show its “there is” and its “giveness” [Gegebenheit], its “appearance”. In the artwork, therefore, a Truth is set-to-work, which is none other than the being of the entity. This is to be interpreted in its most obvious sense: on the canvas of Van Gogh “there are” shoes. Now, all that the intelligence of the philosopher consists of, is moving the attention from the painted shoes to their singular “being”. Here is the Truth with a capital T which according to the Heideggerian paradigm, is set-to-work by the artwork!

But on Van Gogh’s canvas, as Guzzoni notes, there is also that little “rounded root”, that messes everything up … It acts as a detail. According to the art historian Daniel Arasse, in the history of painting there is a particular kind of detail that dislocates meaning instead of reinforcing it. It is symptomatic and thought-provoking. This is not the fine, subtle fragment analytically obtainable by breaking down the whole, whereby I can arrive at the subtlest structure of all (epi leptoteron as the Materialist philosophers said, Democritus), and find a detail that is integrated with the whole, homogeneous to the entity it is contained by. The detail in the artwork that Guzzoni shows us is of a very different kind. It disrupts the whole that contains it. It reveals something heterogeneous that, however much it may be an empirical part of the whole, is surplus with respect to the whole. It undermines the representation from within.

The little root within Van Gogh’s shoes, magnified under a lens, is such a detail. It derails us. But where does it lead to? Geographically and culturally, it takes us to Japan. Speculatively speaking it takes us away from the being of the entity, from the Truth as an Event and as History.

In reality these two directions coincide: Van Gogh’s Japan is the questioning of the ontology of the work of art. That little root restores Van Gogh’s canvas to the bi-dimensionality of the surface, plucking it from the ontological depths of history where its philosophical reading had instead cornered it. The little root is an ambiguous sign. It seems like “an echo of Japanese calligraphy”, Mariella Guzzoni suggests. Now, in an alphabetised culture, writing and painting are different activities: the written word is the reproduction of the spoken voice, and painting is the visual representation of the mute world. But what happens to these definitions where, as in Japan, visual representation is an integral part of writing? The difference in nature becomes a difference in degree, and implies a reference to a common gender that includes both, being neither what we call writing, nor what we call painting, drawing etc. Writing and painting blend into one another. This is a fact well known to the translators of the Oriental poets, who always precede their translations with a note. We must be aware, they warn, that writing in the Orient is not cancelled out by the meaning that it communicates, or the musicality that it expresses. Writing in its figurative quality is an integral part of the text. The same is repeated in any introduction to the “pictorial” work of the Japanese masters, who, as we know, dedicated a significant volume of space to calligraphy. This is not a text that comments on the image, as we might presume, instead it is one with the image, a continuation without boundaries between what we, literate viewers, would call text and what we would call figure or drawing. Where our alphabetised eye would see a combination of heterogeneous elements, there is the simplicity of a third party that contains both (a fact that explains why in Japan calligraphy has pride of place among the arts).

And what is this element that holds them together? The common thread is what the psychoanalyst Jacques Lacan, on his way home from a journey in Japan, called “the letter”. The letter is evidently not what we usually mean by the word, the character of the alphabet. The letter is instead the stroke of the brush that glides across a surface with greater or lesser pressure. It is the generative act of figuration: a figure that is neither the expression of a desire to give meaning nor the representation of an exterior world. Instead, however strange it may seem to us, it is a living thing. This stroke is nothing yet at the same time it is the whole, or rather it is that which gives life to the whole.

Hokusai, in his 1834 “spiritual testament” must have had in mind the generative power of the letter, when (as a postscript to his One Hundred Views of Mount Fuji) he wrote mockingly: “At seventy-three years, I was somewhat able to fathom the growth of plants and trees, and the structure of birds, animals, insects and fish. Thus when I reach eighty years, I hope to have made increasing progress, and at ninety to see further into the underlying principles of things, so that at one hundred years I will have achieved a divine state in my art, and at one hundred and ten, every dot and every stroke will be as though alive”.

Van Gogh’s shoes are for Heidegger an incidence of Truth. Which truth is intended then (truth this time with a lower case t), whether these are the shoes of a peasant rooted in the Earth or a self-portrait of the artist deraciné who wanders in a world now estranged (Meyer Shapiro’s hypothesis)? Endless discussions could be and indeed have been had. In any case, there was an unshakable conviction that the work of art must put us in communication with a Truth, which is the “arch structure” of all of the particular truths. It is the Truth that presents itself in the first person, in its singularity, and that says: I am the truest Truth of all the simply propositional truths (the homoiosis truth, the adaeguatio truth), because of the truth they are the foundation of possibility. Of meaning, of every meaning historically determined, I am the Origin. But if Mariella Guzzoni is correct, it is no longer the Truth that is “historicised” in the work. Of course such an idea would never have occurred to any great Japanese artist. And so perhaps, at last, it is time for Van Gogh’s Shoes to be freed from their obligation to signify the Truth, History, the World (and, ultimately, Man and his dramas), letting them return to their “literal” dimension. This would be more faithful to Van Gogh, who in Japan sought nature and nature alone.

(Translated from the Italian by Louise Fitzgibbon) 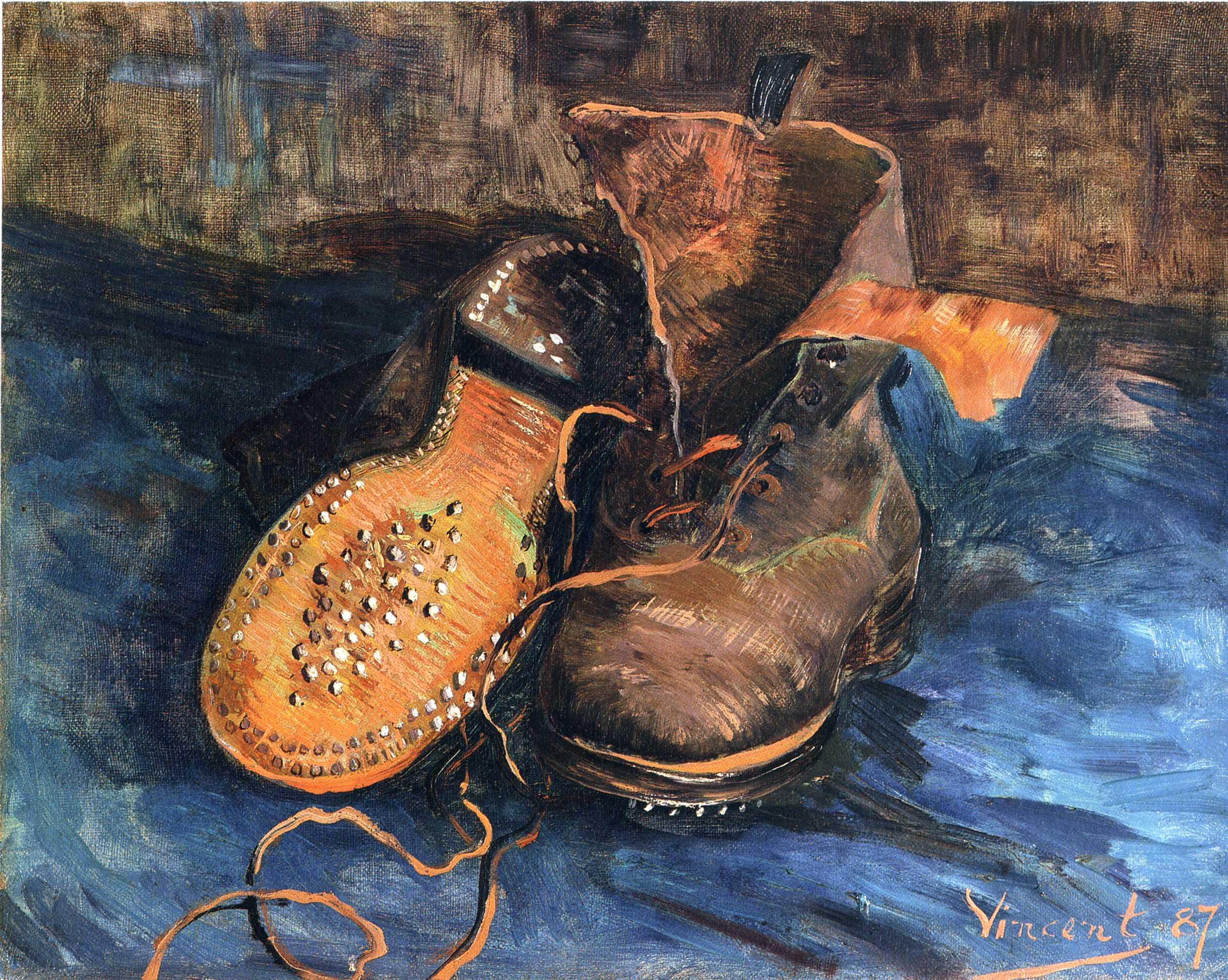 If we continue to keep this space alive it is thanks to you. Even a single euro means a lot to us. Come back soon and SUPPORT DOPPIOZERO
23 January 2018